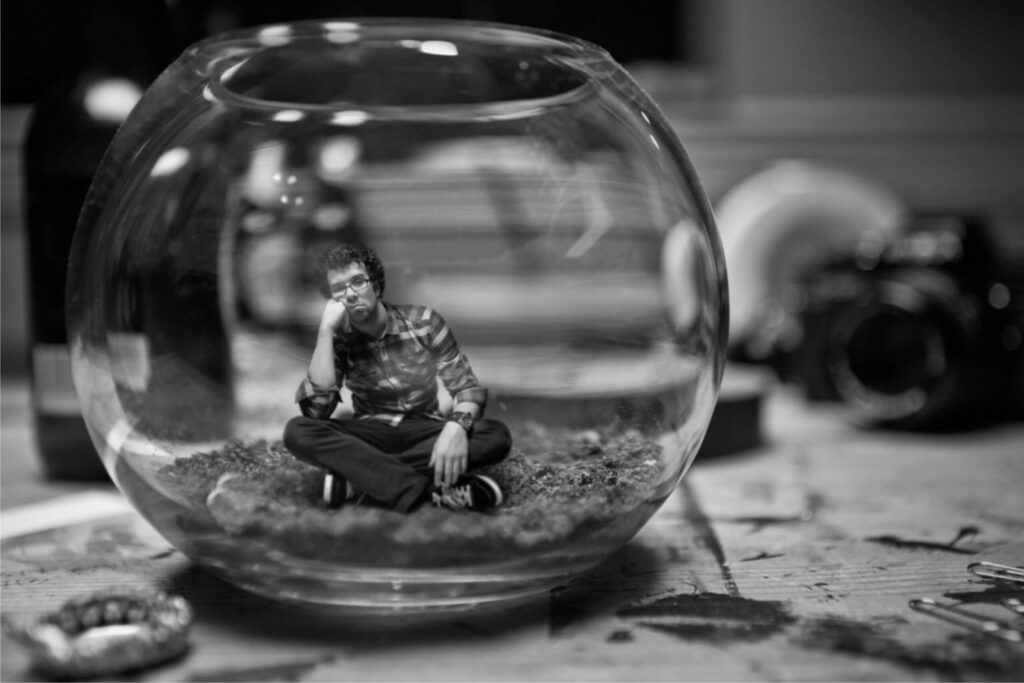 Do You Have the Guts to Live Your Life in a Fishbowl?
Subscribe

It appears that Elon Musk is living proof that The Truman Show is more documentary than drama.

Musk is, of course, the larger-than-life CEO of Tesla. If running one company isn’t enough, he’s also co-founder and CEO of SpaceX, and co-founder of Neuralink. He’s one of the world’s richest people and is also one of the most recognizable and admired business leaders.

The Truman Show is a 1998 film that featured Jim Carrey as a man who suddenly learns, much to his dismay, that he has been living what he thought was his real life inside a reality television show with millions of people watching.

The Musk and Truman narratives collided for me when I watched with some dismay the personal and professional turmoil that the Tesla CEO has experienced over the last few months.

In July, Musk posted a series of tweets that claimed he was suffering from “terrible lows” triggered by “unrelenting” work-related stress. He also suggested that he was bipolar.

In August, Musk posted a tweet saying he was thinking about taking Tesla private, and had already secured the financing necessary to make it happen. The surprising missive sent markets into a tizzy and prompted the US Department of Justice to open a criminal investigation.

In the wake of all that, Musk went on to engage in a mystifying attack on a British man who helped rescue a youth soccer team in Thailand that had become stranded in a flooded cave, accusing him of being a pedophile.

And then, in early September, Musk made headlines again when he was videotaped smoking pot with podcast host Joe Rogan.

We then began to see an exodus of senior executives from Tesla which also created uncertainty in the market, and a lack of confidence in Musk’s leadership and the future fate of the company.

It all got me to wondering: could it be that Musk does not realize that his life, like Carrey’s fictional Truman Burbank, is really a reality show?

This has become the new reality of leading in today’s world. Business leaders of Musk’s charisma and accomplishment are, in many ways, becoming the reality show stars of today.

Thanks to a penchant for some leaders to use social media to express any and all ideas that pop into their heads, and the constant need to be out in front of the public in media interviews, podcasts, and live appearances, we are provided with a constant stream of information about where they are, who they are with, what they are doing and whether they are leading effectively. Many of these things were completely out of the view of the public a decade or two ago. Senior leaders could lead, without having to worry about their every action being on display.

If I put myself in Musk’s shoes for a moment, I can sense the incredible amount of pressure he is under. Pressure that can easily break a person if they are not careful. He’s not just running one company, but three. Part of his challenge is that he may not be all that careful about his level of public exposure and what it says about his health, and the health of his companies.

While Musk is travelling the globe, speaking at conferences, being interviewed by journalists and otherwise living a life of constant movement, Tesla is struggling. Tesla only manufactured 100,000 cars in 2017, and lost a reported $2.2 billion. Of greater concern is the fact the company may need billions more in operating capital just to stay afloat.

What do Musk’s struggles tell us about the current state of leadership? For the highest-profile leaders, your life is an open book and the story it contains may make or break your business goals.

In The Truman Show, Carrey is truly sympathetic as a man who had no idea he was living his life for the amusement of millions of viewers. Today’s high-profile business leaders simply do not have that excuse.

We should all recognize now that everything we do and say as leaders can come back to haunt us. Chastise an Uber driver for being ungrateful and, like former Uber CEO Travis Kalanick, you’re likely to get caught on a dashboard camera. Film producer Harvey Weinstein for years abused and assaulted famous women and engaged in abhorrent behavior in some very public places until, finally, the women went public with their stories.

Think about your own life for a moment. Are you conducting yourself in a way that hurts the organization you lead? Are there elements of your personal and professional behavior that could hurt your reputation, and thus the reputation of your organization? Do you fully appreciate how everyone you work with sees your every action, considers your every word and makes judgments about how you are leading?

If you hesitated even a moment before answering those questions, maybe it’s time to take a hard look in the mirror. You have to live your life like you’re a character on a reality television show, remembering that all you say and do can be fodder for public consumption.

This week’s Gut Check for Leader’s asks: Do you have the guts to live your life in a fishbowl?