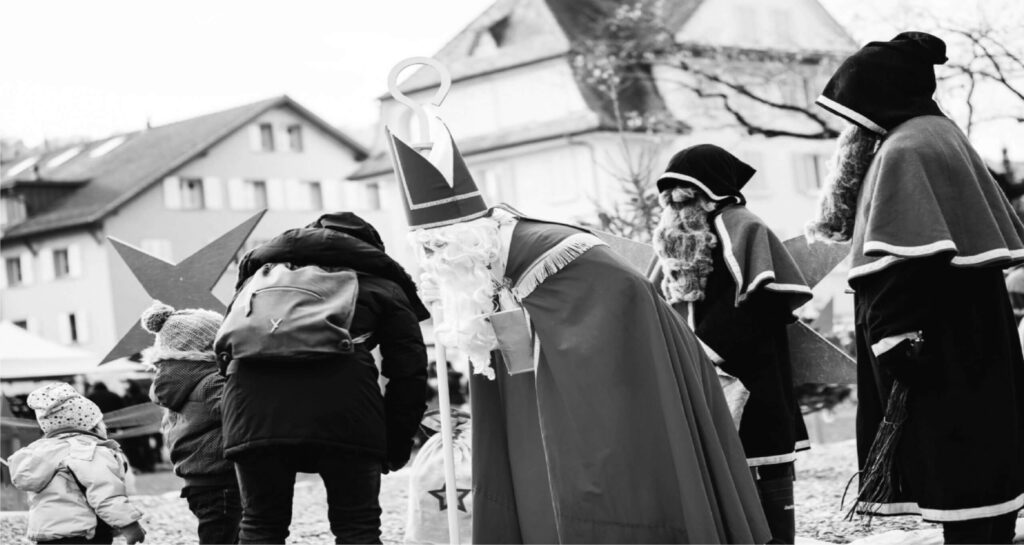 On December 6th, I was having a regular check-in meeting with a client. Philippe, a colleague based in Switzerland, joined the meeting. He began his update by showing us a photo of two characters and told us he would need to drop off the meeting a little early because his kids were going to have a visit with the two characters.  Who were they? Samichlaus and Schmutzli.

He then began to explain that Samichlaus is the Santa Claus of Switzerland. Instead of visiting children on Christmas eve, he does so on December 6th, which is St. Nicholas Day. The celebration of this day goes back for centuries.

I was curious about this custom and did some further research to learn more.

Much like Santa, Samichlaus visits children wearing a red cloak, has a white beard and comes with a sack of presents like mandarin oranges, gingerbread cookies, chocolates or unshelled peanuts which he gives to those who have been good.

A significant difference between Samichlaus and Santa Claus is that Samichlaus doesn’t work alone. He is joined by Schmutzli on his visits. While Samichlaus is a positive figure who gives out gifts to good children, Schmutzli (which means ugly character) is a menacing enforcer. He wears a dark cloak, has a long dark beard, and his face is covered with soot and lard. His job is to punish children who have misbehaved during the year. He brings a broom with twigs to dispense his punishment.

This story intrigued me quite a bit as I began to see parallels to leadership (you should know by now this is something that I always do 😊).

When you are in a leadership role, you read a lot about how leaders need to show up. They need to have a vision, be inspirational, positive and motivational. In many ways, we need to behave like Samichlaus.

But all of us, as leaders, also have a darker side. It’s those times we have a reaction when a problem arises, or someone fails to deliver, which jeopardizes your team’s success. These moments can elicit a different and darker side of you. You become more like Schmutzli, and it can be an uglier side of your character.

What I like about the Swiss custom is that they express the good and the bad through different characters.

This is something that I stumbled across years ago, almost by accident.

One of my favorite aunts, Lisa, lived in Boston for most of her life after emigrating from Italy. She passed away earlier this year at the ripe old age of 94.

Lisa was a feisty and funny character. When she spoke, she did so with a classic Italian-American-Boston accent. She was also the only relative of mine who would call me “Vinny.” Every time I would chat with her on the phone or visit her, I would be greeted with an enthusiastic, “Hey, Vinny, how you doin’?”

Over time, Vinny became a bit of my alter ego. This happened by chance, years back, during a meeting with my team. They were giving me feedback about my leadership style. Some began to talk about the few times I would react strongly to a situation. At times, they were on the receiving end of my reaction. Through the conversation, I realized that when my darker side would come out as a leader, it was my “Vinny” side, it was my Schmutzli.

As soon as I named it and said it out loud, my entire team laughed. They said, “That’s a perfect name.” What happened next was truly valuable.

My team began to give me feedback in real-time whenever they saw Vinny begin to emerge. For example, if ever I became too direct, maybe even too belligerent, my team would say, “Back off Vinny! You are coming on too strong.” This was fantastic feedback to receive in the moment because it helped me reframe and change my approach.

What I also learned was that Vinny wasn’t all bad. Vinny played an essential part in my leadership role. For example, if a problem or issue would arise in our company, my team would say, “We need Vinny to come out to tackle this.” Often the issue had to do with a broader organizational problem or conflict that needed a more direct and forceful approach to address it. A civil or diplomatic approach just wouldn’t cut it.

I immediately found this liberating. For a long time as a leader, I tried to keep Vinny locked up because I aspired to be a level-headed and grounded leader at all times.

Through this experience with my team, I learned that bottling up Vinny wasn’t a good strategy. At the same time, unleashing Vinny without any sense of purpose or control was also not good.  Learning to manage one’s dark side is a vital capability of accountable leaders.

The reason is that being a leader isn’t easy – it’s a lot of hard work. Stuff happens, many times, not always good. This can elicit a negative response and often it is a justified one. Now some leaders I’ve worked with are always in “Vinny” mode.  This is rarely good for a leader. Others are afraid to show their reaction in a situation. They are fearful of their darker side, and this also isn’t a good thing.

The insight I gleaned from all these experiences is the power that comes when you own your darker side, and even label it. So, I started to test out this insight.

The first conversation was with a colleague, Carol. We were debriefing a session we had just led with a group of senior leaders. During the session, I shared what I call my “Vinny story” with the group. It resonated with the leaders. After, I asked Carol what she would call her darker side. She immediately said, “Blades.” It also happens to be her last name. The reason is that when her darker side kicks in, she get’s extremely direct, forthright, stern and precise with her language. As she takes on a person, they end up feeling like they have been cut up into a thousand pieces. That’s Blades in action. I have seen it a few times, and it’s an absolutely accurate label for Carol’s darker side.

Then Carol and I started asking other members of our team if they ever thought of labelling their darker side. It was fascinating to see how quickly some had the label for it even though they never thought about it. What we also learned is that sometimes the name is given to you by a family member – one who knows you really well and has had a lot of experience in dealing with you – the good, the bad and the ugly.

As leaders, we do not have to fear our darker side. We know it’s there. If you don’t learn how to manage it and use it when necessary, then you will not be as effective as you need to be.

Take a few minutes to think about your darker side. What would you name it? If you are struggling to come up with a label, ask one of your family members. I’m sure they will have one ready for you.

The final Gut Check for Leaders blog of 2019 asks: do you embrace your darker side?

Finally, I want to conclude by thanking you for your support over the last year. I also want to wish you and your families a fantastic holiday season and an even more amazing 2020. It’s an exciting time to be a leader in any organization. As I look to the next decade, leaders will need to step up in significant ways. Starting in January, you will see many exciting things coming from my company to help you continue to be a truly accountable leader.

Happy Holidays and see you in the next decade!